(For the full story and more pictures, visit my blog post on this, "Monjeau Peak, Revisted.")


One of my favorite spots in all of southern New Mexico is Monjeau Peak, high in the White Mountain Wilderness near Ruidoso.   Access is by a twisty, windy dirt road that goes uphill steeply to a stone lookout tower built by the Civilian Conservation Corps in the 1930s.  The lookout is at 9500 feet, and from here you have sweeping views of aspen-dotted alpine meadows and 12,000-foot Sierra Blanca.  Many beautiful trails wander over the meadows and beyond.

I should perhaps use past tense in the above paragraph. In July 2012, the lightning-sparked Little Bear Fire burned over 44,000 acres and 254 buildings.  The lookout tower was burned, but the structure remains and will be rebuilt; I believe Monjeau Peak is still closed at this time.

We camped there one fall ten years ago, in a little aspen grove.  While hiking, I became enamoured of the rock boulders that were scattered around.  They made fascinating, beautiful compositions with the fall colors.  I felt compelled to paint them.

I did a studio piece in pastel, which at the time I was very proud of.  I had it framed - quite expensively.  Not long after that, in a workshop with Albert Handell, I had an opportunity to share a slide of the piece with Albert and the group at our critique night.  When the slide flashed up on the wall, Albert exclaimed, "Oy, those rocks!' and suggested that I spend a year painting rocks.  (Which I did.)

As I got better at the craft of painting, I became increasingly dissatisfied with this piece.  Even so, I've dragged the painting around from home to home over the years, and I've kept it hanging on the wall for students and visitors to see.  Why?  For the silly reason that it cost so much to frame.  I suppose I could have replaced the pastel with a newer one, but I had it in my mind that there was something fundamentally good about the piece, and that someday I would "fix it."

There were a number of problems with it.  For one, the mountain in the distance seemed to end abruptly behind a big fir tree; it should have continued on.  For another, the rocks were all evenly-lit, and there was no real focal point among them.  And of course, the rocks themselves, in all their pink-and-purple glory, needed to be pulled back from Cartoonland to reality.

This week, ten years later, I decided to deal with it.  I love pastel because the surface is always "open."  That is, you can go back to work on it at any time without having to treat it in any way.  (With oil, the surface becomes "closed" after a few days, and either have to "oil out" or use retouch varnish, neither of which is really very satisfactory.)  I unframed it, taped it to a board, found the very same photo I had used originally, and went to work.

I'm much happier with the piece now, and it will go back into its frame later today.

Here are some detail shots and the painting in its frame: 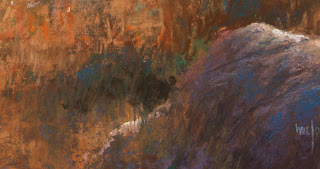 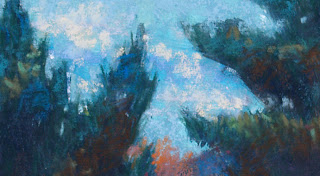 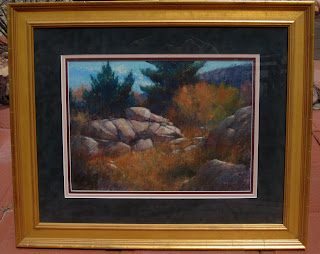 Many of the paintings featured were painted en plein air, on-location. You'll find a range of subject matter and territory--from the mountains of New Mexico to the deserts of Arizona, the colorful valleys of Utah and the snowy peaks of the Colorado.
If you'd like to see and purchase from the full inventory of paintings, visit www.MChesleyJohnson.com/paintings/
Michael also paints small pieces (9x12 or so) that you can purchase directly online at www.MChesleyJohnson.com/small-paintings/